Nanowerk   February 15, 2021
Researchers in Australia studied the electronic properties of magnesium phthalocyanine (MgPc) sprinkled on a metal surface and demonstrated that the quantum mechanical properties of electrons within the molecules (energy and spatial distribution) are significantly affected by the presence of neighbouring molecules. This effect was observed for intermolecular separation distances of several nanometres. Quantitative analysis of the experimental results and theoretical modelling showed that this interaction was due to mixing between the quantum mechanical orbitals of neighbouring molecules. The molecular orbital mixing leads to significant changes in electron energies and electron distribution symmetries. The long range of the intermolecular interaction is the result of the adsorption of the molecule on the metal surface, which “spreads” the distribution of the electrons of the molecule. These insights are expected to inform and drive progress in the development of electronic and optoelectronic solid-state technologies built from molecules, 2D materials and hybrid interfaces…read more. TECHNICAL ARTICLE 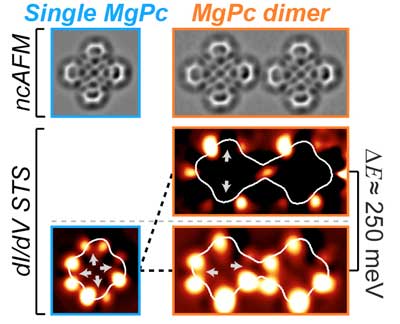