Nanowerk  November 23, 2019
An international team of researchers (UK, USA – Oak Ridge National Laboratory, Lawrence Berkeley National Laboratory) has developed an MOF, denoted as MFM-520, that can capture atmospheric nitrogen dioxide at ambient pressures and temperatures—even at low concentrations and during flow—in the presence of moisture, sulfur dioxide and carbon dioxide. Despite the highly reactive nature of the pollutant, MFM-520 proved capable of being fully regenerated multiple times by degassing or by treatment with water from the air—a process that also converts nitrogen dioxide into nitric acid. The highest rate of NO2 uptake by this material occurs at around 113 degrees Fahrenheit (45 degrees Centigrade), which is about the temperature of automobile exhausts…read more. TECHNICAL ARTICLE 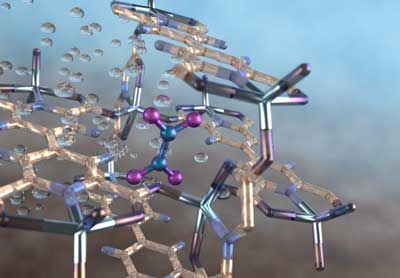