EurekAlert  February 8, 2021
An international team of researchers ( UK, Uzbekistan, Russia, France, USA – Oak Ridge National Laboratory, Vietnam, South Korea, Czech Republic) was able to control the conductivity and magnetism of iron thiophosphate (FePS3) which undergoes a transition from an insulator to a metal when compressed. Using new techniques to measure the magnetic structure up to record-breaking high pressures, they found that magnetism survives, but gets modified into new forms, giving rise to new quantum properties in a new type of magnetic metal. The ‘spin’ of the electrons has been shown to be the source of magnetism. The combination the charge and the spin are key to how this material behaves. Finding this sort of quantum multi-functionality is another leap forward in the study of these materials. This class of magnetic materials offers new routes to understanding the physics of novel magnetic states and superconductivity. They suspect that this newly discovered high-pressure magnetic phase most likely forms a precursor to superconductivity…read more. Open Access TECHNICAL ARTICLE 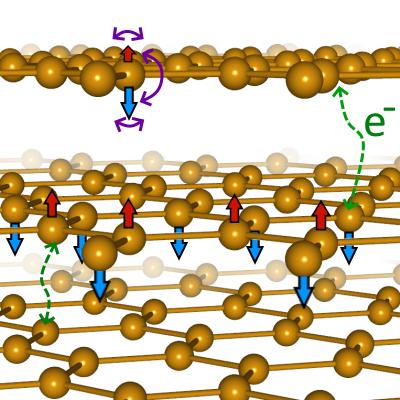 Illustration of the magnetic structure of iron thiophosphate (FePS3), a two-dimensional material which undergoes a transition from an insulator to a metal when compressed. Credit: University of Cambridge